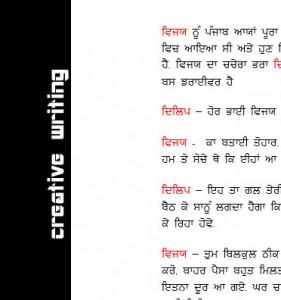 Manuscript of a play in Punjabi that I wrote in 2010

I wrote my first poem when I was 14 years old. The content of that poem was so pensive that it made my mother worried. It was about a person who had faced so much battering in life that he wanted to leave everything behind and become an altruist. And that coming from a 14 year old is a big cause of worry! 🙂

In coming years I wrote more poems. I also wrote a few plays in Punjabi, two of which won awards in school competitions. I have also written a few short stories in English.

In 2000 I worked as a journalist in the ‘Indian Express’, one of India’s leading English language newspapers. I published news reports on various topics including science and technology.